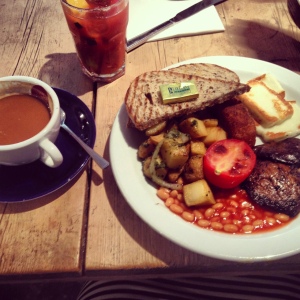 Breakfasts are totally underrated in the UK. When I do manage to have breakfast, it normally consists of coffee and marmite on toast. Aside from hotel breakfasts or grabbing a quick croissant en route somewhere, I don’t think I’ve ever purposely eaten out for breakfast. I’d heard a lot about the Breakfast Club chain, but the queues, that sometimes snake out of the door and down the road, have always put me off.

However, recently, I found myself at my sister’s place on Bricklane, when both of us were up early and very hungry. There was only one thing for it and soon enough we found ourselves seated at the Spittlefield’s chain of the Breakfast Club marveling at the food on offer; fry-ups, pancakes, burritos and all kinds of egg-related heavenly goodness.

Seeing as I was about to embark on a friend’s hen-do which would mainly involve stomping around a dance music festival in Haggerston Park, I decided to stock up properly and opted for ‘Reggie the Veggie’ which included a delicious vegetarian sausage, fried potatoes and the usual gubbins with toasted multigrain bloomer. Now, I’m aware it was just a fry-up, but vegetarian fry-ups can sometimes be so poor. I get it that some people like proper greasy-spoon fry-ups and that, for some, ‘poshing’ up a fry-up is close to sacrilege, but as a vegetarian, I want something more than a deep fried Lynda McCartney sausage and mushy baked beans. I want flavour.

My Reggie the Veggie breakfast hit the spot entirely. It was a huge portion and I felt full after eating half, but I was completely incapable of stopping until every last morsel was consumed. I then found myself looking longingly at other diner’s meals, while nursing my boated stomach – everything just looked so fantastic.

However, my obligatory Bloody Mary wasn’t good, – far too watery and the spicing was all wrong. The menu said it would be ‘Hot and spicy like Helen Mirren’ but it wasn’t quite right, I’m not sure Helen Mirren would have liked it either. I don’t know if they had watered down the tomato juice or weather the bucket of ice they had squeezed into my tiny glass had melted too much, but I’m fairly sure a Bloody Mary shouldn’t resemble cranberry juice with celery. But the freshly squeezed orange juice was wonderful, as was the fresh coffee.

In truth, and I hardly dare say it, it is a great place for kids. Smoothies, pancakes, milkshakes and maypole syrup galore – the children on the next table just couldn’t get enough.

There aren’t many chains that specialise in breakfast-ism but the Breakfast Club chain has taken this meal-time and owned it. All of a sudden, it has become perfectly acceptable to queue for an hour for a breakfast burrito. And why the hell not?

The restaurant opened its doors to punters in 2005 as a small cafe in the heart of Soho. Since then, it has opened four other cafes in Angel, Hoxton, Spittlefields and its latest offering in Battersea.  Next year sees the opening of another arm in London Bridge and I’m sure it won’t be long before they venture out of capital. They have also ventured into festival-land, setting up shop at Secret Garden Party and Bestival among others, offering a similar novelty breakfast experience, queue included as standard.

But with the friendly and attentive service, alongside the quality ingredients and hearty portions, it has become a perfect place for a spot of hangover-nursing. When you do get to sit down, you are not rushed, people aren’t squeezed onto the same table with you and you are allowed to enjoy your food in comfort. It is a refreshing experience to be in such a popular restaurant where getting as many covers in as possible isn’t the main priority.

Step into the Smeg fridge and you enter into what feels like another venue entirely: The Mayor of Scaredy Cat Town. Yes, you read that correctly, like Alice stepping through the wardrobe in C.S. Lewis’ novels, Londoners step through a fridge and enter a dingy basement cocktail bar. Secret venues have been all the rage since the mid-naughties. The Mayor of Scaredy Cat Town isn’t so much a secret, but more of a bar with a novelty door. But ‘exclusivity’, not secrecy, sells – which is probably why it is so busy in the evenings. However, I wasn’t there for cocktails, I was there for breakfast… with a Bloody Mary.

Born in the 80s, the owners littered their Soho cafe with trinkets that are reminiscent of their boyhood bedrooms and even the Breakfast Club’s namesake itself is of the 80s teen film, but the Spittlefields venue is a little more grown-up and a touch more stylised than it’s Soho sister with its caged booths, exposed pipes and stripped wood floors. That being said, when I visited, there were hangover trendies playing on a Sega Mega Drive under a neon sign reading: ‘sex, drugs and bacon rolls’ in the corner. After all, Spittlefields still counts as East London (…just) and therefore some things come as standard. Apparently it is ironic.

But, all in all, it is a fun place to hangout and it feels refreshingly different. The food is not fussy or pretentious, but comforting and hearty. The breakfasts are great – really great, and the coffee hits the spot. Well worth a visit, but get there early if you can.

← Creamy Mushroom Tagliatelle
A Trip Down Memory Lane at Mangals 2 →

What are you looking for?

Find me on the Suma Blogger’s Network!